FALL RIVER — Down a long hallway at the glossy UMass Dartmouth Advanced Technology and Manufacturing Center on Martine Street lies a laboratory where asphalt is king.

The laboratory is the work of civil engineering professor Dr. Walaa Mogawer, who for the last quarter century has been building the capability and reputation of the place among highway engineers nationwide.

To say Mogawer is passionate about asphalt understates the case. “I love the smell of asphalt more than roses,” he joyfully told a visitor to the room in the lab where asphalt samples were being prepared for testing.

The lab had much of the appearance of a kitchen, except that the concoctions being stirred in the metal pans weren’t brownies but some combination of new asphalt, recycled asphalt milled from the surface of the nation’s highways, recycled rubber and recycled asphalt roofing shingles.

It is the latter that occupy Mogawer’s mind these days, since his laboratory won a $249,785 grant from the New England Transportation Consortium to study ways of reclaiming the asphalt roofing shingles that are routinely stripped from houses and dumped into costly landfills.

The asphalt industry in general has been very recycling-minded in recent years, and Mogawer explains why: It’s the price of oil, and the value of petroleum products locked up beneath our feet (or our vehicle tires).

Long gone are the days of 99-cent gasoline and similar prices for everything else that comes from crude oil. Now with oil prices four times that or more, and millions of miles of the nation’s roads paved with asphalt, recycling is compulsory.

“There’s a treasure there,” said Mogawer about the shingles and the pavement. “Why are we throwing it away when we can mill it and reuse it?”

There is much more to recycling asphalt than simply throwing some recycled material into the cauldron along with the “virgin” ingredients that haven’t seen a road surface yet. There are matters of durability, elasticity, and “rutting” by tens of thousands of vehicles’ tires over the same spot.

Mogawer and his student assistants spend countless hours preparing batches of asphalt pavement with varying ingredients, baking them in ovens to bring them up to the typical temperature of hot asphalt. The cooled-off cylindrical samples that emerge from the molds are drilled for core samples and analyzed in any number of ways.

One device rolls over the asphalt sample as if it were a passing vehicle, pushing the material to its failure point within about a day.

Other instruments record what it takes to bend and break a sample of experimental asphalt material. At another work station, samples are subjected to the stress of expanding and contracting in varying climate conditions.

Asphalt, as it happens, is more complex than simply mixing together some sand, rocks, and other ingredients with an asphalt glue, boiling it up at close to 400 degrees, and letting it cool and harden.

The climate where it is to be used matters greatly, said Mogawer. Roads in Texas, for example, require a stiffer surface, something that will resist high temperatures. A highway in Maine will need special attention given to expansion and contraction as the seasons change.

That poses a challenge for the reuse of asphalt or of shingles, Mogawer said. After being exposed to the elements — sunlight and oxygen — for 15 or 20 years, asphalt shingles become extremely brittle, which can be problematic.

As urgently as the industry and government want to recycle shingles to save money and improve the environment, it will take labs like Mogawer’s to determine what recipes, what asphalt concoctions, will do the job as well or better than the materials now being used, and save money in the bargain.

Some of those experiments are under way in the town of Dartmouth, where large sections of Tucker Road were recently repaved using an asphalt formula evaluated by UMass and designed to save money while matching the performance of conventional asphalt formulas.

Dartmouth is one of a number of towns — and states — that have come to Mogawer for analysis of what it is they are putting down on the roadways.

But Mogawer is frustrated that more municipalities aren’t coming to his lab for the free services he provides in quality control testing of new or rebuilt roadways.

Mogawer cites a statistic when he talked about recycling our roadways: Only 1 to 2 percent of the asphalt being produced today goes to the construction of new roads. All the rest, he said, goes into rebuilding existing roads.

That is something the asphalt industry touts as being a strong advantage. Asphalt roads can be milled and repaved over and over again for decades, with the materials being reused to a greater and greater extent.

Mogawer, meanwhile, pushes the envelope with research looking into not only asphalt shingles but recycled rubber, which he said can improve the elasticity of the asphalt mixture. The problem is that there are few suppliers producing the powdered rubber that the lab needs to incorporate into the formulas that it is testing.

Elsewhere, experiments continue on using new additives to recycle asphalt. Mogawar cited a failed experiment in Illinois and North Carolina. “They used swine manure and added it to the asphalt. “The smell was awful,” he said, “and it stuck to their clothes.”

While that failed, other experiments are under way to produce warm temperature asphalt, up to 100 degrees Fahrenheit cooler than traditional formulas. Warm asphalt uses less energy (to heat), is easier to work with, emits less fumes, and can be applied during a longer season.

Mogawer said that his lab produces civil engineering graduates that, should they be interested in pursuing a career in paving material science, are quickly snapped up by the small number of labs like this one nationally.

And he remains a devotee of asphalt, even as innovations emerge, such as tempered glass solar panels that are being touted as a revolutionary paving material. “They’re all good ideas, but they’re not easy to implement,” he said. For the next century or so, he said, asphalt is still the way to go, still king.

DARTMOUTH — Dartmouth is a pioneer in using a special asphalt that reduces traffic noise and is more durable, officials say.

“If this is the best quality product we can find and it lasts longer then that’s what we want to use,” said David Hickox, public works director who said he is excited about the paving job completed last week on parts of Tucker and Russells Mills roads.

“It’s a great opportunity for us to partner with the town to do this and it’s also nice to have a town try something new,” said Andy Brewer, vice president of construction at P.J. Keating Co. in Acushnet, the paving contractor.

The project is a unique partnership between a UMass Dartmouth expert, a contractor willing to experiment, and a forward-thinking town department, said Hickox. The three sides met about a month ago and discussed whether they could use the special mix, so far used only on highways by the state, on local roads.

Walaa Mogawer, engineering professor and paving expert at UMass Dartmouth, allowed former student Joshua Medeiros, now a town civil engineer, to use his lab to test the mix, saving the town several hundred dollars, “because we are trying to get our roads to last longer. If they last longer, it’s less money spent to keep them up to par,” Medeiros said.

He estimated the life of the pavement could be 10 years.

Tucker Road was last repaved in 1997-98 and needed resurfacing after last winter. The project spans less than two miles between Eddy Street and Country Club Boulevard on Tucker and a small stretch of Russells Mills near the DPW headquarters. It cost about $135,000, Hickox said.

“Visually, it’s smoother looking and we are extremely pleased with the high-quality job,” he said. “The town appreciates the university working with us and stretching our dollars.”

What makes it different from a regular paving project is the new “superpave” mix. It uses coarser materials that fit better together to form a smoother surface, reducing traffic noise and resulting in a more compact finish. It allows for a continuous paving job reducing bumps and changes in the roadway so the project was completed in a day. It also involves stringent quality control from beginning to end, contractors said.

“The old DOT system was one size fits all. This allowed us the freedom to design the mix according to our system,” said Matthew Teto, quality manager at P.J. Keating.

“Maybe other towns don’t have the resources we have,” Hickox said. 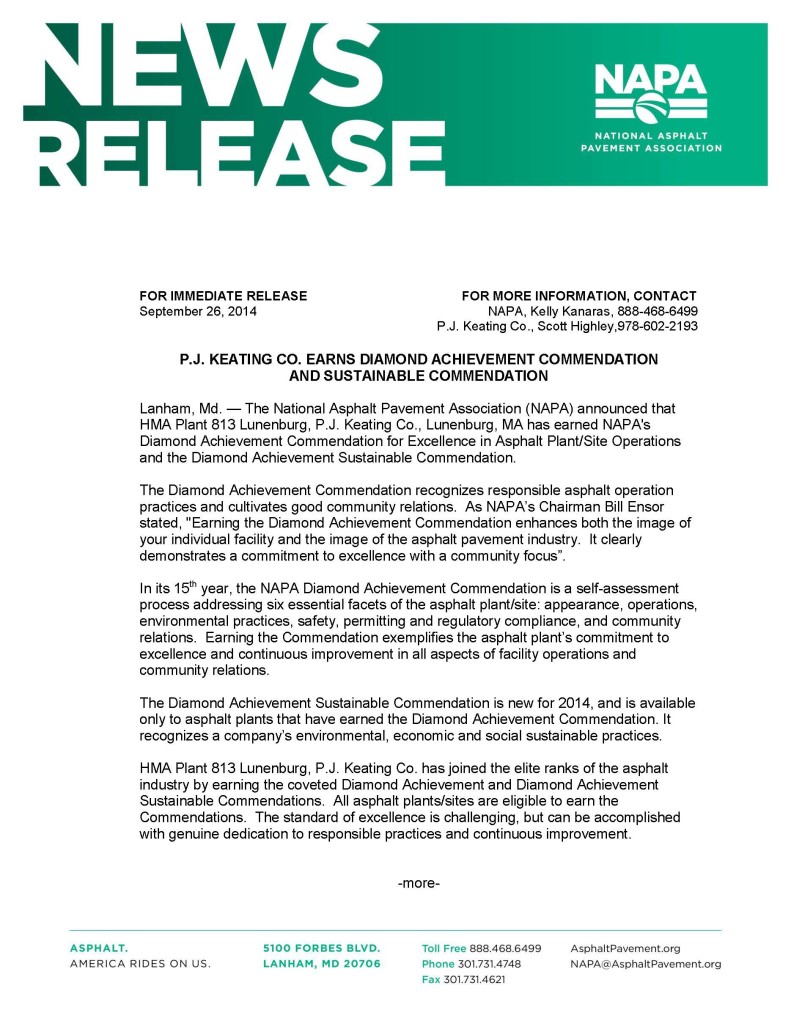 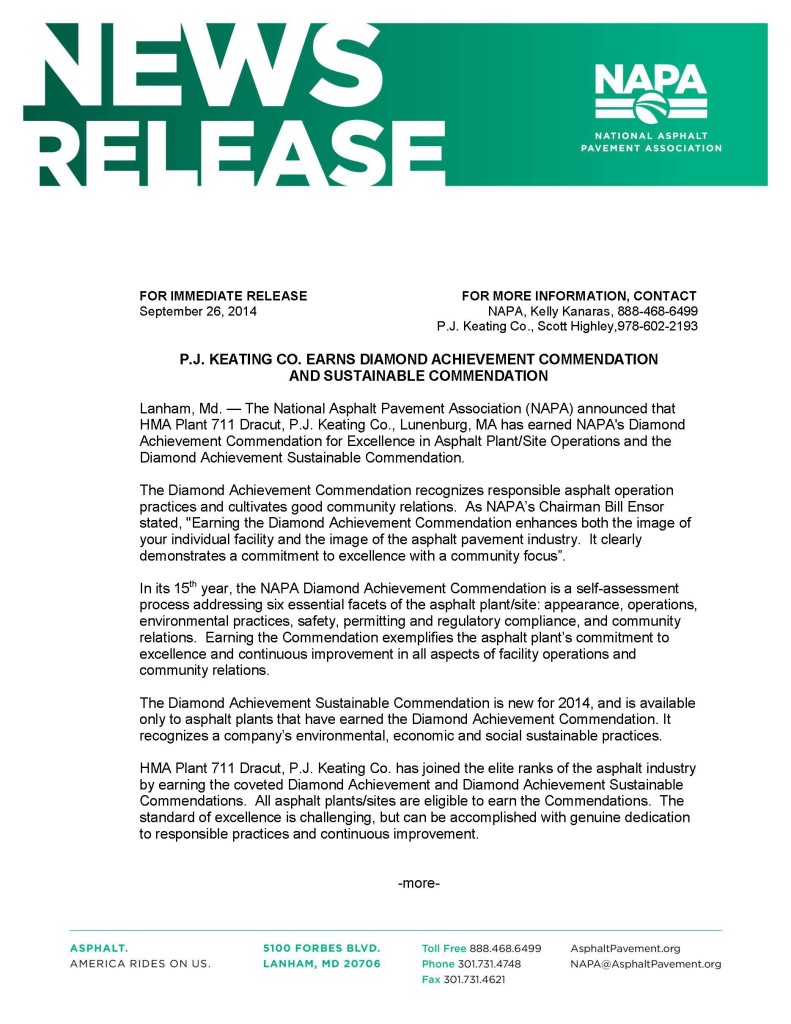 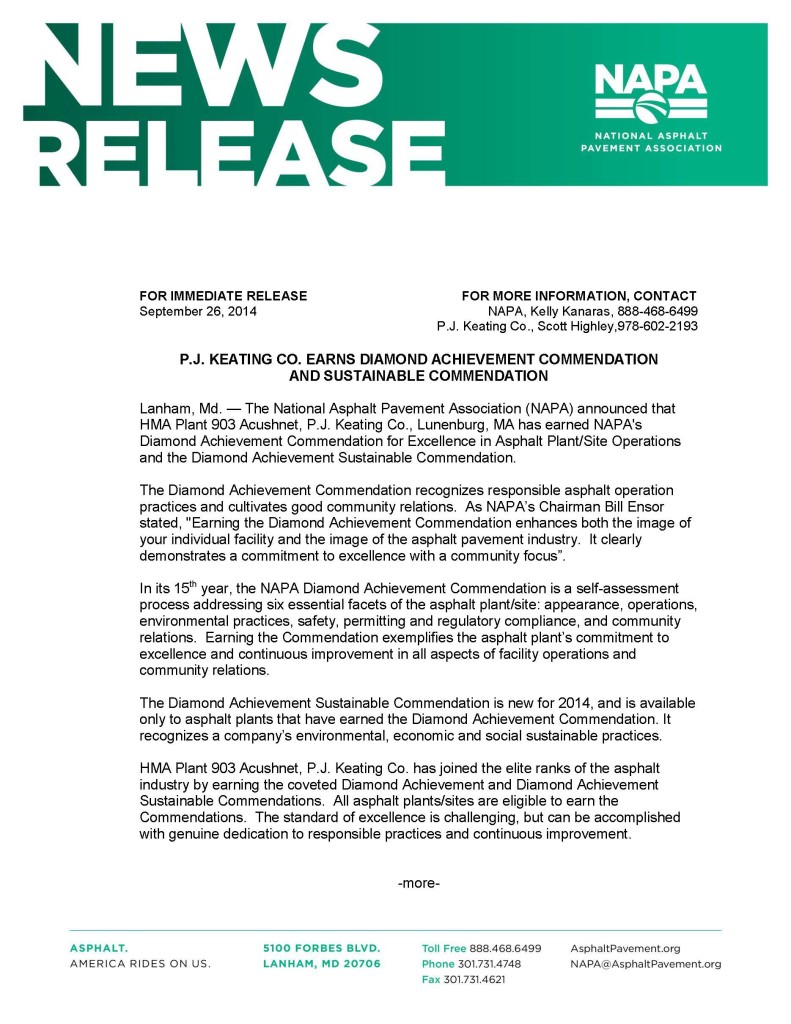 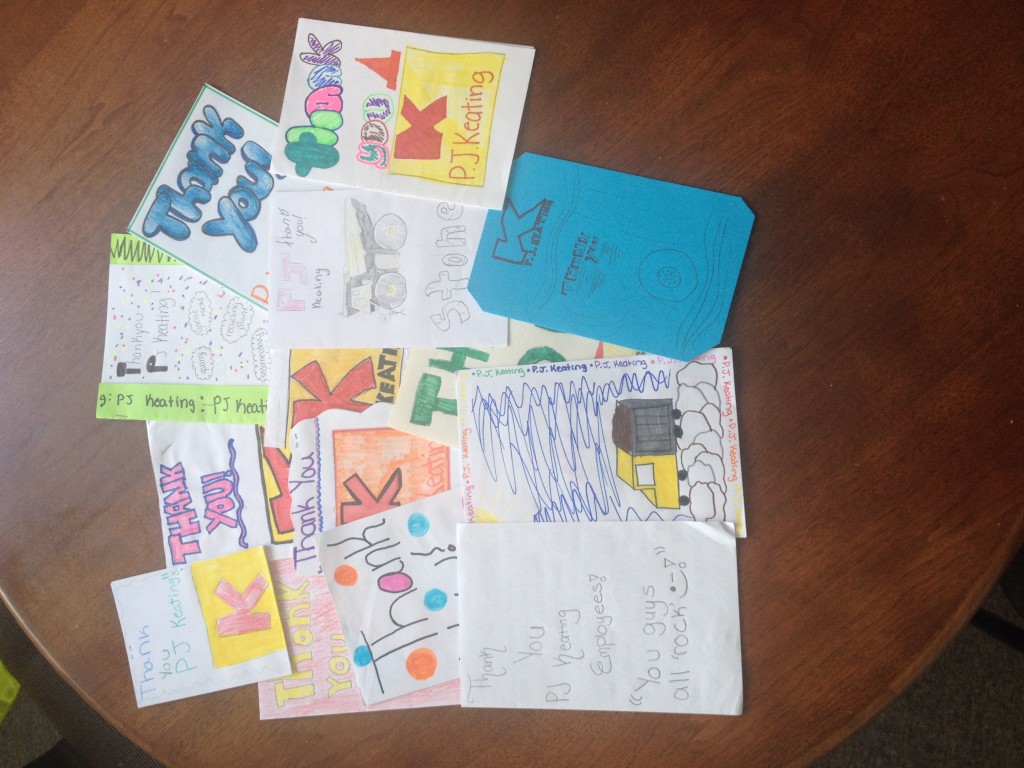 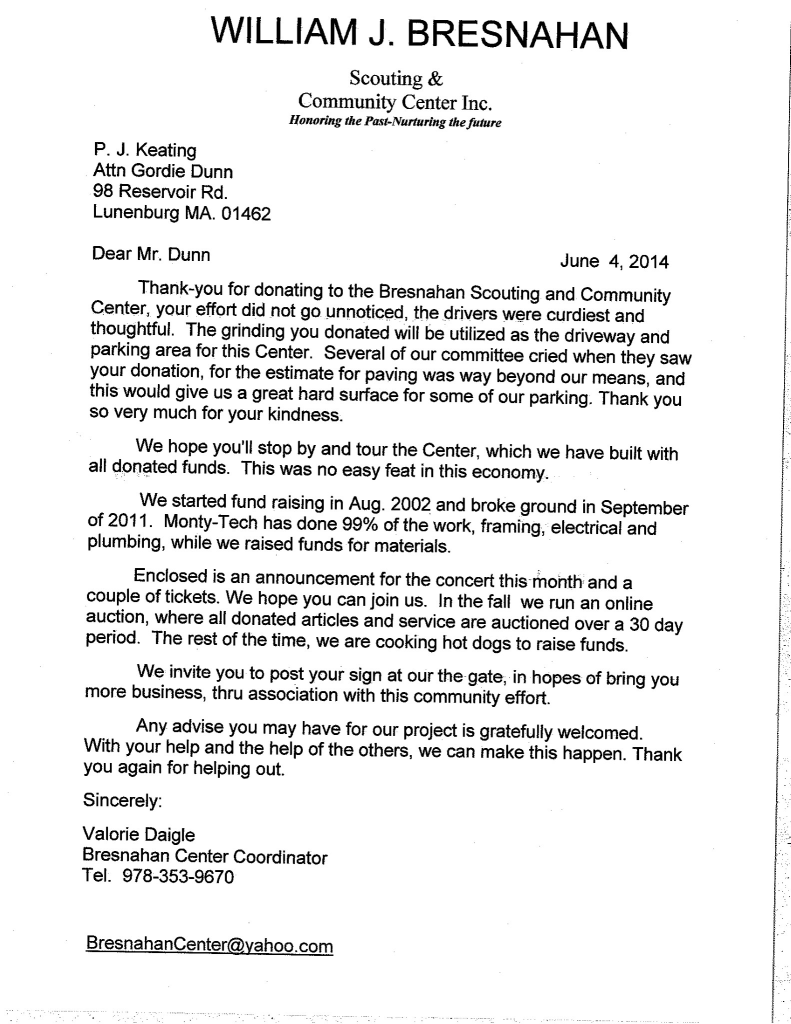 WORCESTER — Cliff Wilson looked out his storefront window on Pleasant Street and wondered if he’ll be able to receive deliveries Wednesday — the day President Barack Obama and his motorcade are expected to pass by.

“I want to put a sign out there: Free frame for U.S. presidents today only,” said Mr. Wilson, owner of Framed in Tatnuck Square. “He’s the only one who might be a customer that day.”

With Air Force One slated to arrive Wednesday, preparations for the 44th president were in high gear in Worcester Monday, with VIP’s confirming their presence, rehearsal times locked down, and flight restrictions imposed.

Mr. Wilson and other business owners on Pleasant Street are being notified about parking restrictions being implemented ahead of Mr. Obama’s afternoon arrival at Worcester Regional Airport.

Mr. Obama will be whisked to the DCU Center — likely via Pleasant Street — where he will deliver Worcester Technical High School’s graduation speech.

The ceremony begins at 4 p.m.

Mr. Obama’s time in the city will likely be brief. After delivering his commencement speech and greeting graduates, he is schedule to attend a Democratic Senatorial Campaign Committee event in the Boston area before returning to Worcester for the flight back to Washington, D.C.

LUNENBURG_For the fourth straight year, sixth graders at Sky View Middle School in Leominster have gotten to see their science lessons played out in real life. The middle schoolers recently visited P.J.Keating Company’s (PJK) plant and quarry in Lunenburg as part of the school’s endeavors to bring science to life.

“The P.J. Keating quarry tour is a true definition of a field trip: an experience outside of the classroom that is not easily accessible to them and coincides with the curriculum. Visiting the quarry allows students to relate their world to the scientific world of rock study, and it’s right in their backyard, a mile down the street from school,” said teacher Sharon Salmonson.

HOPKINTON _ Sunny skies and mild temperatures helped to make the Eighth Annual Massachusetts Construction Career Days (MassCCD,) held on May 5 and 6 at the New England Laborers’ Training Academy in Hopkinton, one of the best to date. MassCCD is part of a national initiative to help educate high school students about the wide range of career opportunities available in the construction industry. More than 50 exhibitors of construction and related companies, vendors, equipment dealers, labor unions, apprentice programs and colleges donated their time, equipment and personnel in order to help bring the construction industry alive for students

P.J. Keating Company is a leading manufacturer of construction earth products in the Northeast. Founded in 1923, today P.J. Keating operates aggregate quarrying, crushing and Hot Mix Asphalt (HMA) production facilities in Acushnet, Dracut, and Lunenburg, Massachusetts as well as Cranston, Rhode Island. Our crushing facilities produce a complete range of dimensional stone products and graded base materials. Our HMA plant facilities produce hot mix to meet the demanding specifications of the MassDOT, New Hampshire Department of Transportation and the Rhode Island Department of Transportation as required. Additionally, specialty mixes are produced for specific projects or unique applications. P.J. Keating Company also offers material delivery services to move both our asphalt and aggregate products to job sites in the most efficient means possible.